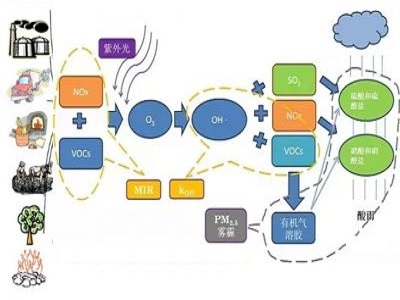 The combined use of hydrogen peroxide and ozone belongs to the catalytic oxidation process in advanced oxidation.

From the analysis of reaction mechanism, the combined use of hydrogen peroxide and ozone belongs to alkali catalyzed ozone oxidation. The characteristic of this method is to produce hydroxyl radical through the catalytic action between hydrogen peroxide and ozone. It is considered to be the most oxidizing substance in advanced oxidation and can degrade organic matter without selectivity.

Because the substances brought in by the oxidation process are decomposed into water and oxygen after reaction, and new impurities requiring post-treatment will not be introduced, this method is first applied to the water supply process with high water quality requirements, and then developed to the field of high concentration industrial wastewater. It has been applied in the United States and Japan, and this process is also selected in the high concentration wastewater treatment process in China.

The method was first developed in Germany. The process was first used for sterilization and improvement of water cleanliness in water supply process, and then developed to advanced treatment in sewage treatment.

As it relates to the field of photocatalysis, this method has certain requirements for the clarity of water in wastewater treatment. If the content of SS in water is too high, the treatment efficiency of ozone ultraviolet combination will be reduced. The method has been used to treat cyanide complex, high concentration organic matter or other chlorinated organic matter in industrial wastewater.

After the industrial wastewater is transferred to the unified and secondary treatment, most of the biodegradable organics contained in the water have been basically removed, and the remaining untreated cod is basically refractory organics that are difficult to biodegrade.

Biological aerated filter (BAF) has a good effect on domestic sewage and municipal sewage with less pollution. It is generally used as the advanced treatment stage of tail water. For the refractory organics that have been biologically treated, the effect of BAF alone is very poor, and there is only partial adsorption effect.

If ozone oxidation alone is directly used to oxidize, decompose and remove this part of refractory organic matter, it will require a large amount of ozone, which will bring a lot of equipment investment cost and operation cost.

Generally, the wastewater after secondary biochemical treatment in industry is first subjected to ozone aeration to degrade most of the refractory macromolecular organics with low B / C into small molecular substances, improve the biodegradability of the water body and reduce its organic load, and then enter the biological aerated filter to further strengthen the biochemistry to meet the treatment standard. Through the synergistic action of the two units, the cost can be reduced. The process scheme has been applied in a large number of sewage treatment plants using ozone.

Combined process of MBR and ozonation

Ozone in the front-end process mainly depends on ozonation of wastewater, which can improve the B / C ratio and biodegradability of wastewater, and has a certain effect on the degradation of a certain amount of refractory pollutants. After ozone pre oxidation, it enters MBR biochemical treatment to reduce the COD of effluent.

Another front-end process of MBR mainly relies on biochemical method to remove a large amount of COD, and uses the advanced oxidation of ozone for advanced treatment to make the effluent quality meet the discharge standard.

How To Get Started

Contact us, Let’s find the most suitable, environmentally friendly and economical solution for each unique project.